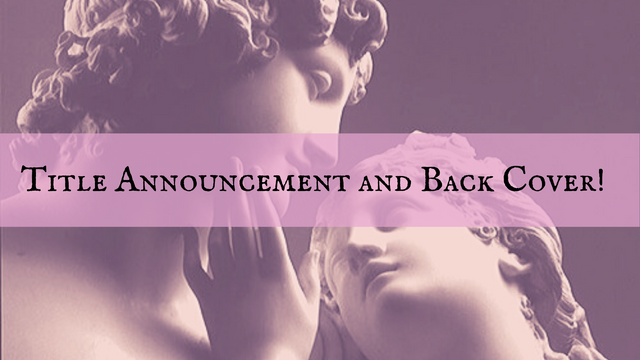 I have some exciting news! Book 1 of the Order of Olympus Series is coming in January and it has a TITLE (and a back cover!) Everyone, I can see the light at the end of the tunnel and I am so so so excited to share my story and my characters with you all!

Read more to get your first sneak peek at this project I’ve held close to my heart for so long.

A hero cursed by the gods…

Once one of the greatest heroes Ancient Greece had ever known, Argos is a far cry from the immortal hero he used to be. After five hundred years of captivity, he is finally free—but a curse from a goddess has left him woefully mortal. In order to become a hero again, he’ll need the help of the gods and the seductive nymph who saved his life.

The only woman who can help him…

Claire Winters is about to open her dream restaurant—and is definitely not a nymph the half-naked man she saved seems to think she is. Taking care of a delusional man while a storm rages is not what she planned. Yet, here she is. She doesn’t have time for the tall tales of her handsome rescue.

When it turns out Argos’s claims are real, Claire finds herself thrown deep into a hidden and ancient world. Now, the two strangers must rely on each other to survive. Together they will face the gods, and the fiery attraction between them, as they work to reunite Argos with his ancient powers. Will strength and wit be enough to protect them? Or will love prove to be the most powerful weapon of all?

HOLDING OUT FOR A HERO is the first novel in the ORDER OF OLYMPUS series. A sexy, action-packed romance series based on Greek Mythology and set in the modern world.

Curious for more? Sign up for my newsletter where I’ll be sharing excerpts and the cover reveal soon! ARC signups are also coming soon. Don’t miss out!