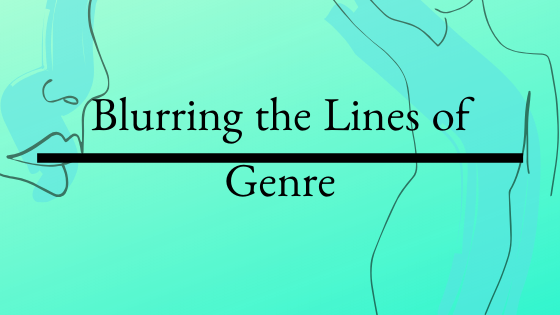 One of the things I hear a lot from authors, agents, and editors is to find your genre- and stick with it.

The publishing business, and readers, like the safety of genres. You know what you’re getting with a romance, there is always a happily ever after (HEA.) And you know in a Fantasy you’re getting quests, magic, epic world building.

So many times I’ve been warned to stick to one genre, don’t blur the lines and don’t expand your shelf to multiple genres until you have established a brand.

I can’t say I necessarily like this advice very much, but I understand it. I could go on about how genres and branding often miss the mark on some books like my favorite Lotus War Series by Jay Kristoff, which either fell in the YA genre or the Adult Fantasy section at local bookstores.  Even the popular Sookie Stackhouse series has fallen prey to the confusion. I’ve always thought of as a romance but always find in the fantasy section of Barnes and Noble.

Think of the famous Outlander Series by Diana Gabaldon, how do you think she marketed her book? For years, people put it in the romance genre, and men stayed away from it. Now that the show is out, men who watch it tell me, “Well its more of a historical fantasy then a romance.”

It is important to keep genre and branding in mind when you write a story, so you know who your audience is and what they’ll expect. It’s also important in order for you to market your book.  To do this, you need to know the certain beats your book needs to hit. A romance without a HEA is not considered part of the genre. End of story. No ifs, ands, or buts about it.

Try to keep all this in mind while also bringing something fresh to the genre and you wind up in a world of confusion- like myself.

I recently stumbled upon an article from Tor that discussed one of my all-time favorite writers Mary Renault. Renault was widely known as a Historical Fiction writer, but some of her pieces have a appeal for fans of historical fantasy as well,  with ancient Greek gods and magic mythos interacting in a historical world.

I’ve been considering how we think about Historical Fiction and Fantasy. So often the lines between the two can be blurred.

As a would-be historian, I find myself writing my stories within the perimeter of the time they are set in; in this case, Ancient Greece. I have to keep in mind what historical figures existed when, what cities influenced what events, and the differences of war and culture between the 5th century and the 4th. It’s a lot of rules to keep in line.

Then I remember my stories aren’t just about the men and women living in this time. I have gods interacting with mortals, monsters who want to be seen as human,  magical items, and quests that grant immortality (i.e. fantastical elements.) My stories always have some kind of quest in them, either mentioned off-handed or directly contributing to the plot. Still, a magical quest is very much a part of this historical world and thus I deem them Historical fantasies.

Doing so elevates some of the pressure I put on myself to get things perfectly accurate. It helps make my writing more fun and gives me permission to bend the rules, just a little bit.

This doesn’t mean I’m giving Leonidas a light saber or a medieval broad sword- My goal as a writer is to try to strike that balance between history and myth. I want my readers to see the parts that are historically accurate and the parts that are fantasy as one. I want my readers to feel the same way I feel when I play Assassin’s Creed Odyssey where I see the care and time the creators took to recreate the ancient world while throwing in just a touch of magical realism.

Above all else,  my novels fall into the romance genre, because these books were the first to capture my attention and make me want to write. I will probably never write a novel without romance elements in them.

Romance has a whole sub-genre of historical stories, Earls and Dukes dominate a lot of the genre. But there is a gap when it comes to stories set outside of the Regency and another gap when there comes to fantasy romance novels– or romance novels set in a medieval timeline, or an ancient setting.

Oh, don’t get me wrong. There are definitely fantasy novels with romantic elements in them and in a lot of ways the paranormal romance subgenre has filled the needs of people looking for a fantasy romance novel. But I wouldn’t mind reading a version of The Hobbit, where the quest took the backseat to the romance AND we get a happy ending. (This is probably why I read so much Lord of the Rings fanfiction.)

In the same way, Historical Romances are different from Historical Fiction, I’d like to see Fantasy Romance set itself apart from the Fantasy genre as a whole.

All of this is a long-winded explanation for why I write what I write. Why I think of my stories as Historical Romance with Fantastical elements- because these are the stories I don’t see enough of and if we don’t push the boundaries of the genre that might never change.

Do I have to choose between history, romance, and fantasy? No, and I don’t see why I should. My stories don’t have footnotes, though I would love to include them if I ever get the opportunity. Romance is always in the forefront if not an equal part of the epic quest.

I was listening to a newly discovered podcast Top to BOTM (which discusses the m/m romance genre.) There is a moment in a recent interview with JP Kenwood where Kenwood discusses her own historical fantasy series, “It’s fantasy. I just wanted a fun romp!”

Same. I want to write stories in the same light as the romance novels I grew up with but with elements that I loved from Mary Renault or Tolkien.

We just have to… blur some of the lines. Because ultimately, we can’t write about ancient Greece without mentioning the Gods and monsters. And I also can’t write a story without romance playing a key role in the plot.

All I hope for is that you, the readers now what you’re getting yourself into when you pick up one of my books.