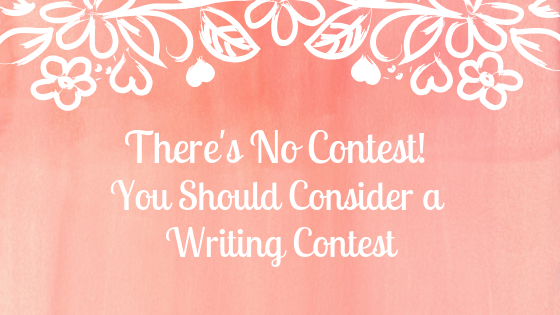 For a long time, writing contests felt like something unattainable to me. This was mostly due to my opinion that contests were reserved for publications like Readers Digest or Publishers Weekly, where they were looking for “serious short stories” or the next American Novel.

There was no place for my silly romance novellas, and I didn’t really know what I would get out of entering a contest, except the inevitable rejection letter.

It wasn’t until I joined the Romance Writers of America, discovered their various local (and digital) chapters, and their writing contests that I realized there was a place for my stories.

Not only did the local RWA chapters host a variety of contests every month, but they accepted all kinds of submissions. From novellas to the first 5-20 pages of a novel. This included contemporary novels, paranormal, erotica, every genre of romance was usually accepted and if one contest had stricter guidelines another would surely accept my story.

When I made this discovery, I had been sending my manuscript out for 6 months, with no offers from agents. So I saw these contests as a great way to prove to myself that my novel was up to snuff. I’d seen some of the books that won previous contests and thought, my story is better than that. Telling an agent it had won first place in an RWA contest was better than my two line bio at the end of my query letter. Plus, the winners of the contest usually got their piece put in front of a agent. It was a win/win.

I was very naive when I started entering contests. I expected nothing but praise and a big fat trophy for the novel I had worked on for so long.

The results weren’t bad, but I didn’t win any contests. Didn’t even come in second place. The feedback I got showed I still had some work to do on the manuscript. The nice thing about contests, and why I’ve come to like them so much is because you’re getting feedback and critique from someone who doesn’t know you. This means you’re getting very honest notes on how your writing made someone feel. Some of it was advice I’d heard before from critique partners and some of the feedback was new. There were notes I could immediately work with, explaining things better, making the first chapter more interesting. But there were also comments that I didn’t agree with.

I entered another contest and another one to see if my piece would sweep the awards. It didn’t, but again the results weren’t horrible. I felt hopeful after reading an encouraging score sheet and then I’d hit rock bottom when someone gave me a 6/10.

But it happens to all of us. Even published author Susan Dennard revealed she entered contests and got last place! Sometimes it’s hard to move on after that kind of rejection, but as writers, we learn to do it.

Contests have defiantly given me thicker skin, I’ve learned to tune out the good advice from the bad. To not sweat the small stuff and take the feedback for what it is. When I entered three contests and heard the same thing from all the judges, it was kind of hard to say they didn’t know what they were talking about. I had to reevaluate my piece and make the necessary changes. (Note: I dragged my feet for two months on rewriting my first chapter of Argos’ story. But everyone said it wasn’t working so… I changed it.)

I would make the changes and enter another contest.

The other thing I would warn new writers about is that the judges of contests differ in skills. Some of them are published authors, some of just members of the chapter or volunteers.

Some chapters have started to teach members how to judge contests and give helpful feedback after a string of discriminatory examples came up this past year. Heck, just last week authors came out and discussed their experiences and scores received from the RITA awards.

The judge who gave it 3.5 also answered “no” to the “is it a romance, does it have a HEA” questions. So.

It isn’t right. And RWA is trying to address these problems, but my point is… it happens everywhere. and one low score is enough to take you out of the running.

The contest page should tell you who to expect as your judge and their expertise. If it doesn’t and you get some hurtful, unhelpful replies to your contest entry bring it up with the contest host. The best thing to do though is to shrug it off as the ravings of a mad (wo)man who doesn’t know what they are talking about.

Finally, like querying, remember that contests are partially skill and luck.

The thing I like about them is that I don’t feel like I’m shouting into the void and only hearing back, “No!”

When a judge tells me “no” they have to also tell me why. What didn’t work? What worked. They give me things I can work on and work with and that is how I choose to grow as a writer. Even though I haven’t won any contests, I still think they are really fun and will continue to enter them.

If you have any questions or comments regarding your own experience I would love to hear it!