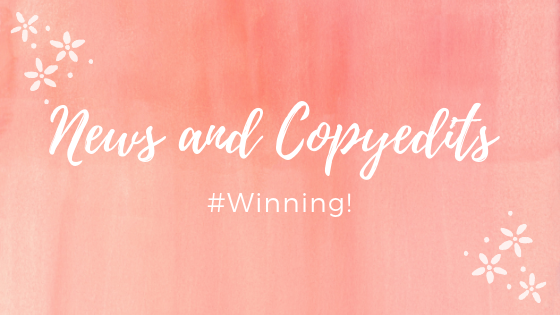 This isn’t my typical Writerly Resource post. Instead, this is a celebration post! Because it is so important to celebrate our victories, no matter how small they seem. And I figured maybe some of you would like an update on how my own writing progress is going.

Before I turn into a pile of excited mush, let me start from the beginning of this story…

After a year of querying with no bites, I’ve decided to pursue the option of indie publishing pretty hard. I’ve done a lot of research and before I left for several months I took a BIG step by sending my manuscript to an Editor.

There are a couple of reasons why I did this, but the biggest reason is this:

I’ve been sitting on my MS for years now. Having people beta read it, editing it on/off, and entering it in contests. For a while, I’ve felt like my MS has hit a wall. I’ve done all I could possibly do to make it shine.  If it wasn’t winning contests or getting agents I needed to take it to the next level.

At the same time, I struggled with this decision. Was I giving up on querying too early? Paying for an Editor is a big commitment of money and deciding to go Indie was an even bigger time commitment.

I hummed and hawed about this for a good long while, before realizing this isn’t the first time these thoughts crossed my mind. No, several times over the course of years I’ve considered going indie. Always as a backup and never with any disparaging thoughts. There is a lot to love about the indie world; setting your own deadlines, having control over what you write, and (of course) the money. I knew all the benefits, yet for years I shied away from it.

I decided if I was going to do this, I needed to be 100% committed. It would mean putting myself out there, investing money, and maybe not even not achieving the success I wanted, but I needed to at least try.

I was tired of waiting.

So I hired an editor to look at my MS and provide copyedits as well as proof edits (or proofreading). I wanted her to point out to me where I went wrong and where I could improve. I needed help to bring my writing to where it needed to be if I wanted to pursue the option of indie publishing.

I did the research. Found someone reputable from other indie authors and RWA and asked her to look at my stuff. That’s the first part of this story. Fast forward months (that’s right, MONTHS) later to when I finally received my edits back.

There is a bit here I’d like to break down for you because I could feel people cringing the moment they read the word “months.” I don’t want you to think it took so long because my editor was a slow worker. My editor was/is awesome and very accommodating of my travel situation. Just know when you hire an editor, they have other clients and a schedule in which they can pencil you in for. I contacted mine at the beginning of March her next opening was May-June. Ouch. But that’s how you learn. Now that we got that out of the way, let’s talk about the edits I received.

When I received my editor’s notes back I was in the midst of the craziness that was another work trip. She suggested the typical turn around date for corrections was two weeks. I knew I wouldn’t be able to do that. Not because I didn’t care, but because my life had reached a new level of crazy. Remember my last post? Yep, crazy. I could barely find time to talk to my husband every night on the phone, how could I make the deadline for corrections?

The answer, I couldn’t.

Luckily, my editor was extremely understanding of the situation. I couldn’t have picked anyone better.

Every time I found a spare moment though I was editing. I struggled to figure out the best way to chip away at my 265-page novel and the sections that would require extensive rewrites. There were so many times when I was convinced I was making my story worse. Where I second-guessed every word and decision I made. It was a very steep learning curve that I will probably write another blog post about sometime. But in short, copy edits were NOT easy.

They made me relook at every aspect of my novel. Every change I made needed to be double-checked to make sure it didn’t have a ripple effect in the rest of the book. It was slow going.

Even when I returned home from my trip, after nearly 7 weeks of being gone I shut myself up in my room and dove into editing. My poor husband was NOT a happy camper.

Still, I trudged on. And finally, after two weeks of constant writing, I finished my edits on Sunday afternoon.

I say finished, but it certainly didn’t feel like it. When it comes to writing, I can always find things wrong with my manuscript. Always. There are were improvements I could still make. And I knew that. But still, I sent those edits back to my editor because of the same feeling that compelled me to reach out to her in the first place.

If I didn’t do it now, I never would.

That little feeling in our gut that wants to wait until everything is perfect is a nuisance. It is part of the same family of voices that tells you you’ll never be good enough. That feeling keeps people away from trying because we’re afraid to fail. But we only learn from our failures. We’ll never move forward unless we try.

Believe me, I sat on this manuscript for YEARS before deciding enough was enough.

So copyedits are done, proof editing is currently going on, and I drank a whole bottle of wine last night to celebrate before jumping back in Book 2.

I hope you all found this to be helpful.  I’m trying hard to be totally transparent about this process, so let me know what questions you might have and I would love to help. I had so many questions before diving into the research and I still have so much I don’t know. But the fun thing about indie publishing is that a vast majority of us are learning together. So I want to help as many people as possible with my own mistakes and victories as examples.

Just leave a comment and I’ll try to get back to you as soon as possible.